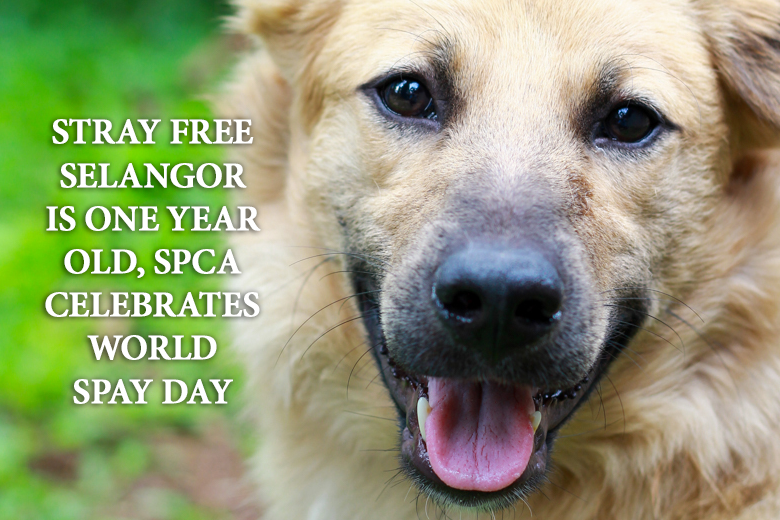 22 February 2018, Selangor — World Spay Day is an international day of action to promote the sterilization of pets, community cats and street dogs as a way to save animals’ lives. It takes place on the last Tuesday of February—and World Spay Day provides an opportunity for shelter and rescue organizations to highlight their spay/neuter programs and win more community support in the form of donors, volunteers and clients. Created by the Doris Day Animal League in 1995 as Spay Day USA, World Spay Day has been recognized by nearly 70 countries, shining a spotlight on the power of affordable, accessible spay/neuter to save the lives of companion animals, community cats and street dogs who might otherwise be put down in shelters or killed on the street. The prime reason why World Spay Day was created is because every day, millions of animals suffer on the streets around the world. Too often, governments deal with this overpopulation through cruel and inhumane means. Most people support spay/neuter, but affordable services are out of reach for many pet owners, and funding is always needed for street animal surgeries. World Spay Day helps by raising awareness of available services or the need for them by organizing a related event or activity on World Spay Day or sometime during the month.
For SPCA Selangor, 23rd of March marks the 1st Year Anniversary for SPCA Selangor’s Stray Free Selangor (SFS) – The Humane and Compassionate Way campaign. Stray Free Selangor (SFS) was officially launched on the 23rd of March 2017 by our Royal Patron, Duli Yang Maha Mulia Tengku Permaisuri Selangor Tengku Permaisuri Norashikin with the aim to achieve Stray-Free Selangor, and also stray-friendly Selangor.
This aim is very much in line with the vision of World Spay Day and the efforts of SPCA Selangor in promoting Stray Free Selangor is a statewide effort to control the population of strays through neutering and spaying in a humane and compassionate way. It is a long-term campaign to help curb the increasing amount of stray animals in Selangor as SPCA receives a high volume of calls and reports regarding stray cats and dogs in almost every neighbourhood on daily basis. Therefore with the cooperation and commitment of the residents as well as the independent rescuers, business owners and local authorities, Stray Free Selangor helps by providing 50% (dogs) and 80% (cats) subsidies for neutering. When stray animals are removed in their original location, it will create a ‘vacuum’ (a condition without current stray animals) which will only indirectly attract other stray packs to move in thus repeating the sad cycle all over again.
Since March 2017 until December 2017, Stray Free Selangor campaign has managed to successfully neuter a total of 1092 animals; 802 cats (573 Female cats and 229 Male cats and) and 290 dogs (237 Female dogs and 53 Male dogs) were located in various districts in Selangor. Throughout the campaign so far, SPCA Selangor has managed to raise RM 110,000.00. Sponsors and donors include the Selangor State Government, Yayasan Raja Muda, and platinum sponsor Robots and Rembrandts.
The campaign continuously focuses on Humane Education, High-volume Spay-Neuter and Government Lobbying in Selangor in hopes of encouraging the Selangor communities to embrace a more effective, humane and less costly stray population control method instead of using the current preferred stray control method of Catch-and- Kill practiced by all Municipal Councils in Malaysia. SPCA Selangor has successfully carried 9 education talks which focuses on Responsible Pet Ownership (RPO), DogCare Program and CatCare Program while promoting Stray Free Selangor in multiple universities, institutions and residential communities in Selangor. Neutering via collaborations with municipal councils, private vets, rescuer and NGOs was also carried out in order to achieve a higher number of successful sterilizations. SPCA continuously lobbies for community animals, habitats for non-aggressive and spayed/neutered stray dog packs and cat colonies, mandatory spay/neuter on adoptable animals as well as compulsory Responsible Pet Ownership (RPO) for dog owners.
SPCA is constantly engaging with new residential communities in hopes to convince them to participate in Stray Free Selangor as a better alternative and solution to help with their current stray animal issues, as this effort will convince the municipal councils to be aware of the stay animals which are already neutered and spayed. SPCA also proposes and encourages the public to create ‘Caring and Compassionate Communities (CCC)’ for Safe Zones where the spayed/neutered animals can live their lives free from captivity and misery. The CCC is a guideline made by SPCA for the communities who wish to be proactive and start turning their own communities into a compassionate and caring one by setting up feeding stations in the area they would like to start the project. The feeding station will attract strays to inhabit the area around it. CCC teaches the community to learn and understand the animals’ moving pattern, feeding time, identification for male and female animals, identification for aggressive and non-aggressive strays and those which are feral. The community will be able to control and contain the stray animals through this method and through spaying and neutering them. The feeders must be educated on being responsible feeders by catching (assisted by SPCA if needed) the strays they feed to spay/neuter them with the Stray Free Selangor subsidized vouchers.
“The vision of Stray Free Selangor is ‘A Home for Every Soul’ and we can achieve that as SPCA Selangor promotes high volume, low cost spay/neuter programme for all companion animals — owned or cared for by the local community. We look forward to the day where there are no more strays in Selangor. We believe that we can achieve that through Stray Free Selangor, the Humane and Compassionate Way. As we approach the Year of The Dog, we appeal to all communities to give some thought to the plight of stray dogs in the community,” Ms.Christine Chin, Chairman of SPCA Selangor said.
#StrayFreeSelangor #SPCASelangor #NeuteringSavesLives